Let's have a look at the differences of the massage pistol Evieun GK1 and TheraGun G3Pro in comparison.

The Evieun GK1 with 0.75 kg is lighter than the TheraGun G3Pro, which has a weight of 1.4 kg. A lighter device is naturally more comfortable in the hand. Heavy weight is not an advantage with massage pistols in the treatment.

The battery life is longer for the Evieun GK1 with 4,5 hours than for the TheraGun G3Pro with 1,3 hours.

The TheraGun G3Pro has a replaceable battery, which is not the case with the Evieun GK1.

The Evieun GK1 has 3 steps. With the TheraGun G3Pro you get 2 levels. More steps do not necessarily mean that a massage pistol is better. However, you have the possibility to vary more in the levels. More relevant at the end is the range of strokes per minute for the massage guns. Thus the Evieun GK1 is not necessarily better than the TheraGun G3Pro.

For the Evieun GK1 the average volume is 45 dB. The TheraGun G3Pro has an average 75 dB and is therefore louder. 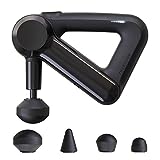 TheraGun liv
We respect your privacy
We use cookies and other common technologies to provide you with an optimal user experience. Some are necessary for the operation of the site, others are used for statistical purposes, preferences or personalized advertising. Many technology providers access cookies or local memory and process personal information such as your IP address. You can obtain detailed information about the services in our privacy.
Accept all
Accept selection
Show settings & cookies
Hide Settings & Cookies
Necessary