Dyson 360 Heurist vs Vileda VR 201 PetPro - Where are the differences?

The suction robot 360 Heurist of Dyson differs in a few points from Vileda VR 201 PetPro. Let us go into the differences in detail.

Since the Dyson 360 Heurist with a height of 12 cm is higher compared to the Vileda VR 201 PetPro with 8 cm, it fits less well under furniture.

The Dyson 360 Heurist with a device power of 195 Watt has more power than the Vileda VR 201 PetPro with only 28 Watt. Thus the 360 Heurist is more powerful.

Unfortunately both devices do not have an integrated wiping function. This is a disadvantage compared to other suction robots.

The dust containers of both devices are the same size with -. So here both suction robots perform equally well. 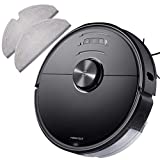 Dyson 360 Heurist
We respect your privacy
We use cookies and other common technologies to provide you with an optimal user experience. Some are necessary for the operation of the site, others are used for statistical purposes, preferences or personalized advertising. Many technology providers access cookies or local memory and process personal information such as your IP address. You can obtain detailed information about the services in our privacy.
Accept all
Accept selection
Show settings & cookies
Hide Settings & Cookies
Necessary